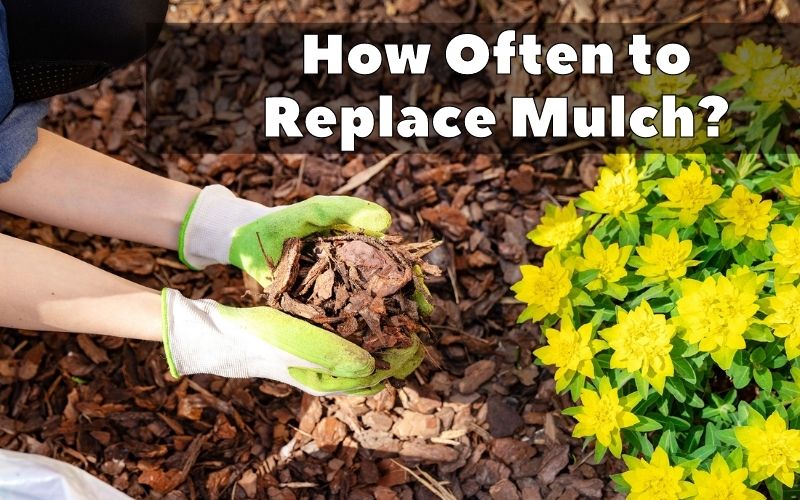 Mulch is a great thing to add to flower beds and around trees. It prevents weeds from growing, adds a manicured look to your yard, and can add nutrients to the soil. However, mulch will eventually need to be replaced.

Several factors determine how often to replace the mulch. Most home experts say you should replace it every five to six years as it can get worn down by then. However, the type of mulch you use can determine when you replace it. Organic mulch, like wood chips, won’t last as long as pebble rock.

Most people think of mulch as a compost material or wood chips but it can be a variety of things. Mulch is anything that is placed on the surface of dirt to improve appearance, improve soil drainage, maintain soil temperature, prevent erosion, and suppress weeds.

Mulch can be bark, pine straw, compost, and even pea gravel. Any of these things can block sunlight to prevent weed growth and help with drainage and temperature.

Read: How To Get Rid Of Mushrooms In Mulch?

One of the main reasons people use mulch is to control weeds. While mulch can reduce weeds, taking some extra steps will guarantee success in controlling weed growth.

You can use a landscape fabric first before laying your mulch. That will also prevent sunlight from reaching into the soil and stop weeds from growing. You can also dig deep edges around your garden to keep weeds from traveling under the mulch. It also helps define your garden.

When Should I Replace Mulch?

You won’t be replacing mulch as much as you will be replenishing it. Mulch, any kind of mulch, will lessen in appearance over time.

Some hints that your mulch may need replenishing include discoloration, erosion, or decomposition. This can happen within one to two years of putting out mulch.

The good news is organic mulches add nutrients to your soil as they decompose. However, they lose their effectiveness so you may see some weeds or soil erosion.

Most landscape experts recommend sticking to undyed mulches as the dyes can release chemicals into the soil. The undyed varieties can start turning gray after only a year. However, they are still effective.

You may replace them to increase the beauty of your landscaping but there isn’t a necessity to do so. They will need replacing once they start significant decomposing.

It’s always good to know what is in your mulch and how it’s produced before purchase. After all, this is going into the soil.

Read: What Is Mulching And Its Advantages?

The two words can equate to the amount of effort you want to put into updating your mulch. Replacing mulch means raking it up, bagging it, and carrying it off to a landfill or garbage center.

A better option, for your soil and your back, might be to simply replenish it. Adding a fresh layer on top of the old mulch will improve the looks of your garden without needing to rebuy all the mulch or raking out the old.

You will need to rake the old mulch to stir it up and make it even with the landscape. Mulch can gather into spots due to water and weather and may need respreading.

After raking, apply new mulch over the old. This can be done every year or two. It can be helpful to plants as the old mulch continues to decompose and add nutrients to the ground.

The only time you need to replace mulch is if you are moving from one type of product to another like from wood chips to pea gravel.

Experts state to keep your mulch laying to two inches or less. Thicker layers can decompose badly without enough oxygen and that can mean it releases harmful chemicals into the soil and to plants. Thick layers of mulch can produce mold too.

Another piece of advice is to keep mulch away from plant stems. Another tip is to apply a fertilizer with high-nitrogen content when using a wood chip mulch. Wood chips limit nitrogen and that can show up in annuals and perennials.

While the bulk of people uses mulch for flower gardens and landscaping, there is a mulch that is used strictly for vegetable and fruit gardens. This is a compost mulch and it is typically added yearly.

This type of mulch is best used in one of two ways. Some in more moderate climates will give the garden soil a good tilling in the fall, adding the compost mulch as they till. They let it sit over winter, allowing the nutrients to replenish the soil, then till it again for spring planting. It’s a system that works well.

Those in harsher winter climates will wait until early spring to till the garden plot and add compost mulch then and plant soon after. That will work to get new nutrients to the seeds and plants but the compost isn’t as well mixed as in the first technique.

Some put pine straw mulch out every fall around flower beds and trees to keep plant roots covered during the winter. This is important with younger, fragile plants but becomes less necessary as plants and trees become established.

Read: How To Attract Deer To Your Yard?

How Much Mulch Do I Need?

You will need to do some math calculations and perhaps some measuring to know how much mulch you will need but the formula is to multiply the square footage of the mulched area by its depth of mulch planned.

A cubic yard of mulch will be enough for 324 square feet, so divide the multiplied number by 324 and round to the nearest how number. That is how many cubic yards of mulch you will need to buy.

Read: How To Build An Underground Room In Your Backyard?

Should you remove old mulch regularly?

Most landscapers say removing old mulch is unnecessary as you can layer it with new mulch to improve the looks.

Which is better, black or brown mulch?

Both are equally good and can help your flowers and plants stand out. The color you choose really depends on the color of the home and the plants. Black mulch makes green foliage look greener while brown looks good around bright, flowering plants.

No, mulch doesn’t draw bugs or insects like termites. However, mulch that is more than 3 inches deep can create a home for pests. It traps heat and moisture and that can attract bugs. Keep the layers at 2 inches or less.

Which mulch color fades the least?

Most mulch will turn gray after being exposed to sun and weather for a time. It can happen in as little as two months for non-dyed brown mulch. Dyed mulches can last for as long as a year.

What mulch lasts the longest?

Inorganic mulches last longer than organic variations. These are things like pea gravel and rubber fabric mulches. Landscaping fabric will also hold up longer than the mulch itself.