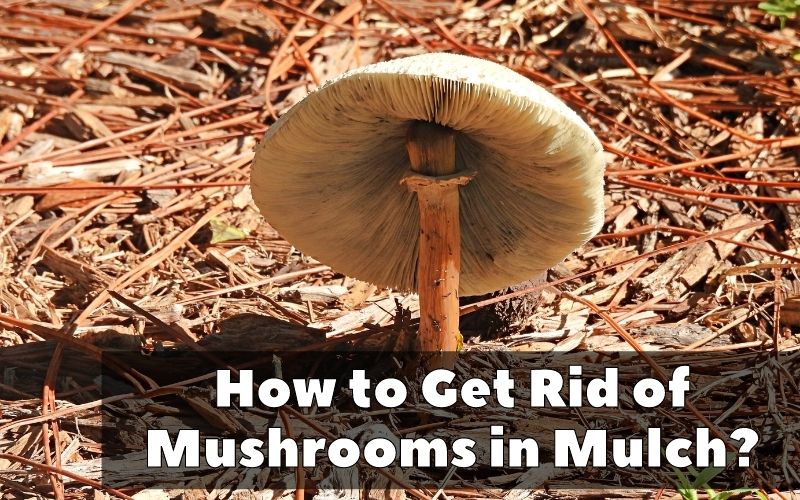 Nice, neat flower beds make a home and yard more attractive. They can even add to the value of your property. However, it isn’t always easy to keep flower beds and mulched areas looking great. Mushrooms can pop up.

Several ways exist how to get rid of mushrooms in mulch. You can spray them with a baking soda, vinegar, or dish soap solution that will kill them. Fertilizer and lime will work too. Manually pulling them, adding new mulch, and raking old mulch will also reduce the mushroom population.

The following article tells you all you need to know about how to prevent mushrooms from growing in mulch and killing off the ones that are there.

Why Do Mushrooms Grow in Mulch?

Mushrooms are fungi and need two key things to sprout and grow. They need decaying organic material and moisture. Mulch provides both.

Mulch is full of decaying organic nutrients that help mushrooms grow. It also holds water so it tends to be moist. Plants and trees in mulch offer shade that keeps the moisture from evaporating.

One thing you can do to prevent mushroom growth is to trim back your shrubs and trees. That allows more sunlight to hit the mulch and prevent the mushrooms from growing.

The fact that mushrooms are growing in your mulch shows that your soil is good. The problem is they are unsightly among your flowers and trees. There are ways to get rid of them, although some ways may be more difficult to implement than others.

How to Kill Mushrooms?

Mushrooms aren’t so terrible except they can grow in colonies and take over an area, making mulched flower beds look terrible. There are some proven ways to get rid of them.

Those ways include using many safe and natural ingredients rather than a store-bought chemical. It may be an ongoing battle for a while but you can get rid of mushrooms with any of these methods.

Read: What Is Mulching And Its Advantages?

Baking soda diluted in water can be sprayed directly on the mulch. This will increase the pH of your mulch, making it impossible for mushrooms to thrive. Mushrooms like acidic soils.

The right combination is one tablespoon of baking soda to one gallon of water. Be sure to spray it over areas instead of pouring it. Be careful not to get it too close to other plants. Mushrooms should die within three days.

The process may need to be repeated if you see more mushroom growth. While baking soda kills spores, it may take a few treatments to kill all fungi growth.

Vinegar does a great job of killing mushrooms because its acid damages mushrooms and kills off both spores and mycelia. The combination is one part vinegar to four parts water and spraying it on the mushrooms and mulch.

Like baking soda, it’s best not to spray the mixture on other plants. However, vinegar is a good natural remedy to kill mushrooms and prevent spore growth. Plus, it’s cheap and readily available.

Dish soap has been a remedy to kill fungus for a long time. It’s safe to use as long on flower beds as you don’t spray the flowers and other plants. The combination is two tablespoons of dish soap to three gallons of water. Spray it directly on the mushrooms and not on the flower bed generally.

You may need to repeat this method during the mushroom growing season to prevent them from taking further root in your flower bed.

Eliminating a food source is a good preventive method for any type of garden pest.

Lime is recommended to kill mushrooms but, in reality, it only slows down their growth. It does add pH to the soil, similar to baking soda. Lime treatment is also good for plants, especially ones like hydrangeas that thrive in acidic soil.

Lime is one of the more dangerous elements to use so protect yourself with goggles, masks, and gloves if you use it.

Removing mushrooms is one way to get rid of them but you also must consider what you need to do to prevent them from returning. Manual removal of mushrooms involves more manual work but combining it with some of the other methods may give you more success in keeping mushrooms out of your mulch.

Taking out mushroom colonies by hand is one way to rid your garden of them quickly. You must be sure to take out the whole plant to be effective. Even if you remove the whole colony, there could still be spores left waiting to grow.

You will likely need to repeat this removal process every few days as you see mushrooms sprout. Eventually, there will be less if you keep pulling them while they are young plants.

Raking and breaking up your mulch will let some of the wetter portions have some sunlight and air. That will help reduce the chances of mushrooms returning. You will need to rake it about every three days for a while to ensure new mushrooms don’t sprout.

You may want to take some extra time to remove mulch that is mushroom heavy. It may be best to ditch that section of mulch rather than keep fighting with growing spores.

Home experts suggest adding a new layer of mulch after raking it will help reduce mushroom growth. Add about a half-inch of new mulch over the old. This will also cover up remnants of old mushrooms and make your flower bed look fresh.

What do mushrooms growing in mulch tell you about your soil?

Growing mushrooms lets you know you have soil that is rich in organic matter. It is the sign of a healthy flower bed, although they make it look a little unsightly.

The best way to kill mushroom spores is using baking soda on the flower bed. Be sure to spray the mushrooms, both the caps and stems, with the mixture. The mix is safe for the flower bed as long as you don’t directly put it on other plants.

Is there a certain dish soap to use in killing mushrooms?

No, any brand of dish soap will work to kill mushrooms by dissolving them in water and spraying it on the fungi. However, be sure to pick one that doesn’t have a degreaser or bleach in it.

Is cinnamon a fungicide?

Yes, cinnamon can be used as a natural fungicide. It is also good to use on plants according to several scientific studies. It is especially good for tomato plants.

What are some natural antifungal treatments?

How do I prevent spores from spreading?

You kill the caps, which contain the spores. There is a way to catch the spores before they hit the ground. Put white paper around a mushroom and spray it with hairspray. Put a glass jar over the mushroom for two days. The spores will drop on the paper. Throw the paper away. Kill or remove the mushroom.