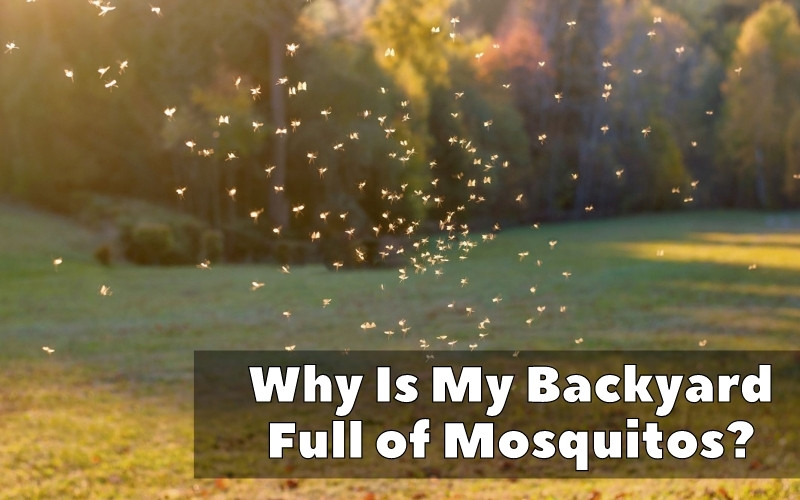 Mosquitos are not only pesky creatures that aggravate anyone outside every day of the spring and summer. They also can carry disease and make for some itchy bites. Your yard is attracting them and there are ways to get rid of them.

Why is my backyard full of mosquitos? The answer is pretty simple. You have standing water or wet soil. Mosquitos need water to both lay eggs and for the larvae to develop into the blood-drawing insects they are.

Read further about how to make your yard unattractive to these pests and eliminate them.

Mosquitos are typically a problem as the weather warms. It can start when nighttime temperatures are above 50 degrees Fahrenheit. It can become a real problem on a hot humid day.

Mosquitos such blood is specifically for nourishment to lay and hatch eggs. They don’t depend on blood as a daily need. Mosquitos lay a lot of eggs with some laying up to 100 eggs at once. This makes it difficult to keep them managed and may require several repellent and extermination methods.

Many home experts are pro-repellent rather than extermination because mosquitos make up the eco-cycle and are food for other creatures. However, there are safe, environmentally-safe ways to both repel and exterminate mosquitos.

Read: Why Does Your Backyard Flood?

Do the Obvious First

Dump old water out of birdbaths and other water features regularly and add fresh. Don’t let Empty water from kiddie pools when children are finished playing.

Other things you can do that will reduce the mosquito population are to fix window screens, clean the gutters at they have water and debris that mosquitos love, and mow the lawn. Mosquitos love areas with high grass and wet soil to lay eggs.

Those with pools and ponds have an extra challenge with mosquitos. Treat them with a liquid larvicide or larvicide dunk. Be sure to run the filter regularly. Keep the pool covered when you aren’t using it.

Read: Why Does Your Backyard Get So Muddy?

Plenty of ways exists to repel mosquitos. Some of the best ideas are here.

This is a thin net you drape over outdoor spaces to prevent mosquitos from coming in. It’s perfect for dining areas and is cheap too.

You can reduce standing water by using a collapsible water bowl when your pets are outside. Bring it in when they come in.

Use Natural Odors to Repel

There are natural products from outdoor soaps to essential oils that will repel mosquitos. Bathing in a non-toxic, natural soap works even while you sweat.

Essential oils work but aren’t as effective. One winning combination is coconut and neem oil, which can be sprayed on the skin to repel too. Other solid choices are lavender, citronella, garlic, camphor, burning coffee grounds, sage, rosemary, basil, lemon balm, and Listerine mouth wash.

Most of these can be found in candles too. Scented candles work as well as essential oils.

Read: Why Is My Backyard Always Wet?

Several things can be used to kill mosquitos. Some are a little surprising.

Most people grew up with a bug zapper on their back porch. The sound may be annoying but they do work.

It’s cheap and easy to install an oscillating fan. It works to repel and even kill mosquitos because mosquitos aren’t great fliers and can’t fight the fan’s breeze. Plus, it will keep you cool on hot days.

Mosquito traps attract and kill mosquitos. Best of all, you can make them yourself. All you need is a plastic bottle, a little sugar, some water, and dry yeast.

How to Create a Mosquito Trap?

The mosquitos will drown trying to get to the sugar mix. This trap is reusable but you will need to replace the solution.

Read: How Do I Turn My Backyard Into A Natural Habitat?

A chemical will kill mosquitos and repel others. There are several that can be sprayed over entire laws and generally last up to two months. Some options include DEET and Picaridin.

You can make some changes to your yard that not only add to its natural wonder but will get rid of mosquitos.

Plants like marigolds, geranium, lemongrass, peppermint, and rosemary are all-natural mosquito deterrents. Planting them in key areas will help repel the pests.

Cedar mulch is a two-fold remedy. The oil in it repels mosquitos and the mulch absorbs excess moisture, which makes also deters mosquitos.

You may want some wildlife in your yard that would love to feast on mosquitos. Some birds, like swallows, purple martins, and some waterfowl are great pest controllers. You can set up bird feeds and bird nesting areas to attract them.

Goldfish, koi, and red-eared slider turtles are good to have in a pond as they all eat mosquitos and larvae.

A bat house will attract the flying, furry creatures. Bats are wonderful mosquito killers but give some people the willies. Contrary to popular belief, bats don’t attack humans unless provoked.

Read: Why Are There Many Frogs In Backyard?

Why are there so many mosquitos so early in the season?

Mosquitos don’t understand seasons. They go by wetness and temperature. If it is rainy and temperatures rise, they will take advantage and start breeding.

Why do I have mosquitos in my house?

They are probably breeding from pooled water around your air conditioning or in a garden. Mosquitos tend to net in kitchen lofts, storerooms and pantries so clean those often. Also, make sure there are no openings to your home and that your window screens are secure.

More than the flowers, mosquitos are attracted to the damp soil or water around them. The flowers most attractive to mosquitos are those that are water-born flowers.

What attracts mosquitos to humans?

Humans and animals emit carbon dioxide and that is what attracts mosquitos. They also can sense things like perspiration, skin odor, and body heat. Also, they like dark-colored clothes.

How long do mosquitos live?

The most common form of mosquito in North America lives only seven days.