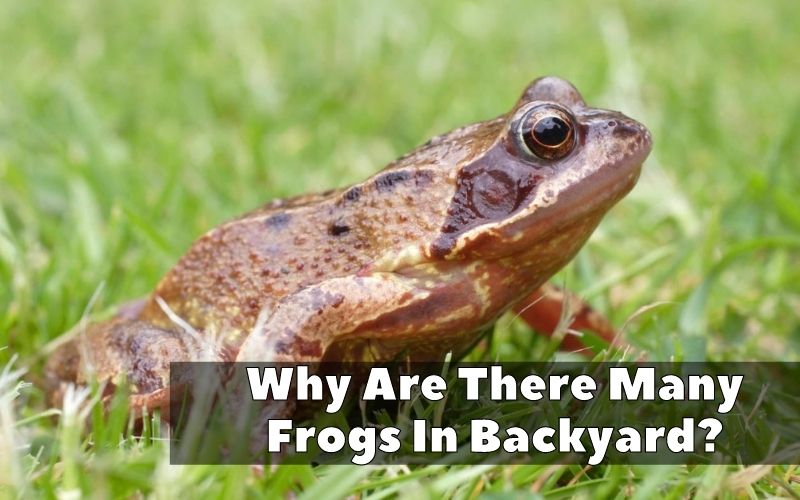 Frogs aren’t bad creatures and can even prove to be helpful. However, a plethora of them can be noisy and aggravating. Some frog species can also be poisonous to pets so there may be good reasons why you may want to reduce the frog population in your yard.

Why are there many frogs in backyard? There are two reasons and both should concern you. You have a lot of moisture and a large insect population. This is what attracts frogs.

You may want to see why both moisture and bugs are increasing in your backyard because you may have a worse problem to contend with than frogs.

Read further to find out how to live with or deal with frogs in your backyard.

Frogs and toads get a bad reputation. Both help gardeners and homeowners because they keep insect pests under control by eating them. Frogs and toads limit the number of beetles, grasshoppers, grubs, slugs, and cutworms in your yard because one can feast on more than 100 insects nightly.

Having a few frogs and toads will limit your need for chemical pesticides.

Read: How Much Does It Cost To Redo A Backyard?

The key factor in why frogs are attracted to certain areas is the availability of water. A pond, a creek, or a water feature will attract frogs and toads. A shady, damp area that can provide shelter and safety is another item that attracts frogs.

Vegetation is something else that attracts frogs. They look for certain plants, mostly aquatic plants like water lilies, sedges, and rushes. These are the plants where they can lay eggs and provide shelter for tadpoles.

Algae is an important source of food for tadpoles so an abundance of that will be something frogs want in a habitat.

Frogs want vegetation cover both on the water and on land. They like shrubs and crowded plants along waterways. That also includes leaf litter, logs, rocks, and other things that can provide shelter for frogs.

A backyard that contains many of these things is going to be a frog paradise.

Read: Are Backyard Renovations Worth It?

Frogs are skin sensitive. They drink and breathe through their skin so they can feel it when you use chemicals like fertilizers, herbicides, or pesticides on your lawn. They won’t go into areas they sense there are chemicals.

However, those who garden organically will see more frogs. This is especially true if you have healthy soil, companion plants, and rotate crops.

It is a good thing for frogs to live in your garden. They don’t eat leaves or produce but do eat the insects, making for better harvests.

Hundreds of frog and toad species exist. Some, like bullfrogs, survive well in most climates and with fish. Others, like treefrogs, can’t live with fish. This is important to know to understand both why certain frogs like your land why you may see some dead frogs or toads.

Read: How Much Should I Spend On My Backyard?

Too Much of a Good Thing

Even frogs and toads are things to be welcomed into the yard, you can get too many. Some can carry diseases and others are poisonous to pets. There are plenty of reasons why you should keep the frog and toad population to a manageable level.

Aside from going on a frog hunt, killing the tadpoles, or destroying eggs, there are options you have to reduce the frog population. The following suggestions revolve around discouraging them from nesting in your yard.

Frogs are telling you your backyard has a lot of moisture. That may be a serious problem you want to eliminate. Eliminating the moisture issue will also probably resolve a heavy insect problem, which is another reason frogs are attracted to your property.

Resolving both of those will lead the frogs to look elsewhere for feeding and breeding grounds.

Those who have ponds have a more complicated situation. Home experts advise getting a frog-proof mesh to go over your pond when not in use or during the winter and spring. That will prevent frogs from using it.

You can eliminate overgrown vegetation that provides both covers for frogs and food for tadpoles. That means reducing the algae, water lilies, and growth along the edge of waterways like creeks and ponds.

Rake up leaves, clean up around rocks to reduce the amount of nesting areas frogs need.

There are things you need to do before you start any aggressive measures to reduce frogs in your backyard. The primary thing is to find out what kind of frogs exist. Some frogs are on the endangered species list so they would need to be handled differently than common frog populations.

There are natural ways to discourage frogs from coming into your yard without killing or permanently hurting them. Home experts state that sprinkling coffee grounds in the area will work well.

Coffee grounds add positive things, like nitrates, to the soil. It also makes it too acidic for frogs. They will feel it on their feet and leave.

You can also make a saltwater mix and spray your sidewalks, the perimeter of your home, and other areas where you don’t want frogs to go. Saltworks on frogs similarly as it does on snails. Salt will dehydrate them and will kill them if they are exposed to it too long.

However, the saltwater mix typically causes their feet to sting and they leave the area.

Read: How Big Is The Average Backyard?

There may be times that trapping and relocating large numbers of frogs is necessary. One of the reasons for doing this is if you have one or more endangered species on your property. Contact a pest control company to ask about this option. You can also call the local university extension office or a state park wildlife official.

When do frogs breed?

Spawning starts between March and the end of June. April is the main month for frog breeding. It will take time for the eggs to hatch and tadpoles to turn into frogs so you may not notice breeding until later.

What frogs are poisonous to humans?

The most poisonous frogs are poison dart frogs. There are more than 100 species on earth. However, most live in South America.

How many eggs can a frog lay?

Most frogs lay thousands of eggs. The exact number depends on the species. A common toad can lay between 3,000 and 6,000 eggs in its lifetime.

Typically, no frogs won’t hurt gardens. They can be beneficial because they eat bugs that can destroy crops. They can eat thousands of insects in a season. Some frogs can disrupt roots and bend plants beyond repair.

Why are frogs noisy at night?

Frogs are nocturnal creatures. Nighttime is when they feed and move around. That is when they also make noise to other frogs and issue calls.

Will frogs hurt my pets?

Typically, frogs and toads are not harmful to pets. However, pets that like to kill frogs could be injured in their attemps. That is especially true if they jump in ponds to get to the frogs.

Some frogs that aren’t poisonous to humans are poisonous to pets. Research the types of frogs in your area to ascertain their danger.