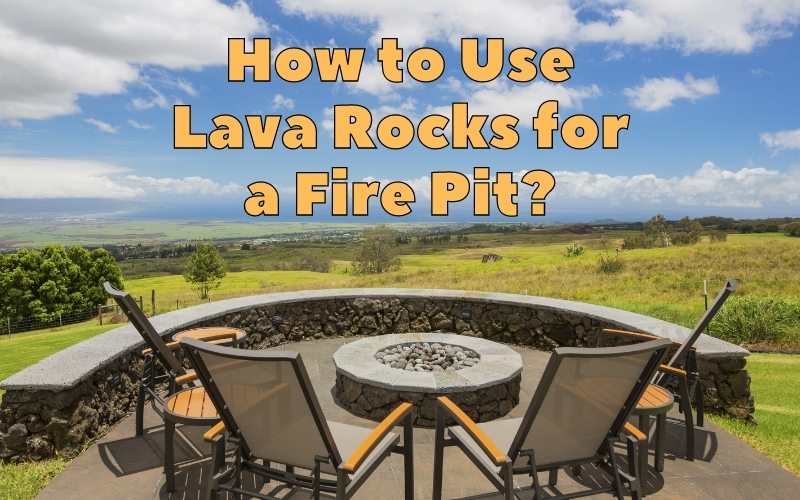 Lava rocks are a great way to protect your fire pit and add a cool look to it. They have other advantages such as being easy to clean and helping distribute heat so it’s no wonder people love to use them in their fire pits.

Read on to find out more about using lava rocks for fire pits.

Experts recommend you use smaller versions of lava rock as the first rock layer in a fire pit. This provides a good foundation for other rock layers added on top. Smaller lava rocks create thermal protection too.

Before you use lava rocks in your fire pit, open the rock container and dump what you want to use in a bucket. Pour water on them and rinse them off. Lava rocks can collect dust while being shipped.

After a good rinse, put the rocks on a towel. They should air-dry for a few hours before using them in a fire pit.

Once you have a good location for a fire pit, add some pea gravel or sand to the bottom first. This helps with water drainage before you add the lava rock.

Cover the bottom with a thin lava rock layer. There should be five inches of space left from the pit’s top lip after you layer the lava rocks.

Now, put the wood on top of the protective rock layer. You can light the wood as you normally do with a fire starter or newspaper.

Benefits of Using Lava Rocks in a Wood Fire Pit

Lava rocks make for a better distribution of heat, which protects the fire pit from cracking. The surface will eventually develop hairline cracks after repeated heating and cooling. Lava rocks act as a protective membrane.

Lava rocks are porous so they don’t collect water should your fire pit get wet. You should build your pit so that it drains but lava rocks stop the fire pit from retaining water.

You can easily use lava rocks in a gas pit. Make sure the gas fire pit is fully operational before placing rocks on top. That means the burner should be in position and the plate should be in the right spot.

The gas, whether it’s propane or a gas line, needs to be connected.

Put lava rocks all over the fire pit and burner. It should be just enough to barely cover the burner. Be sure not to create a thick layer on top.

Now, you can light your fire pit and enjoy the warmth and glow of the rocks.

Read: How Can I Make My Backyard Attractive?

One of the main reasons people love to use lava rocks in fire pits is that they have a natural look. It adds to any party or outdoor event.

Another reason lava rocks are popular is they retain heat longer than most other methods, which is helpful in a gas fire pit. They make heat distribute evenly and are a clean form of energy.

Lava rocks will get dirty after a few fires but are easy to clean. All you need to do is place the cool rocks in a buck and rinse. You can use a mild soap and let the rocks sock for a few minutes. Rinse and let them dry on a flat surface.

Lava rocks come in different varieties that look and behave differently under heat. The colors are black, grey, red and brown.

Lava rocks come in different sizes including crushed gravel, a small rock of up to 1-inch in diameter, and larger rocks with a 4-inch diameter. Most lava rocks that are used in fire pits are those with 1 to 3-inch diameters.

The Cost of Lava Rock

Lava rocks are a cheap asset to a fire pit. It is more affordable than other choices. The cost of most lava rocks is between $2 and $3 a pound. The amount you need depends on the size of your fire pit. You should buy enough to cover two or three inches along the bottom.

Read: How Can I Make My Backyard Fun In The Winter?

Lava rocks are a safe choice for fire pits but some things can cause problems. Lava rocks that isn’t completely dry can explode and pop. You need to cover your fire pit when you aren’t using it to prevent it from getting wet to prevent this safety issue.

Metal covers are a great option. They can be expensive but well worth it because they keep embers from escaping after you’re done with the fire pit as well as protect your pit from the weather.

What Not to Use?

Lava rocks work well in fire pits but other types of rocks  aren’t meant for this type of use, and should be avoided.

Experts state you should never substitute sandstone, natural rocks, river rocks, or gravel for lava rocks. These rocks aren’t made up of the same material as lava rocks and aren’t meant to be under heat pressure.

They can explode under heat and that presents a safety danger.

You should use only genuine lava rocks for a fire pit. Synthetic lava rocks may confuse you because they are called lava rocks. However, they aren’t meant for use with heat. Those types of rocks are used for decor and weed control in flower beds and plant containers.

What’s the maintenance like for fire pits with lava rocks?

Lava rocks are a low-maintenance option for fire pits. You will need to rinse them at least once a year to prevent debris or dust from building up.

What are lava rocks?

Lava rocks are natural element rocks that are formed by an erupting volcano. Lava cools and hardens and that creates the rock. This is why lava rocks are great for fire pits. They can withstand extreme heat.

What are lava rocks made of?

Lava rocks have many minerals and some chemical components like iron, magnesium, and calcium. Minerals include olivine, pyroxene, amphibole, and plagioclase feldspar.

Where can you buy lava rocks?

You can buy lava rocks at any hardware store or farm supply store. You can also buy them at big box stores and online retailers.

Are there lava rock alternatives?

While lava rocks are one of the best natural materials to use in a fire pit, you can also use lava glass or fire glass. Lava glass is also a natural element as it’s a dark glass created by volcanic activity. Fire glass is manufactured glass created by man.

Glass can create a beautiful effect with fire. You can also add a layer of glass on top of lava rocks to get the glass effect but keep the natural heat distribution of the lava rocks.