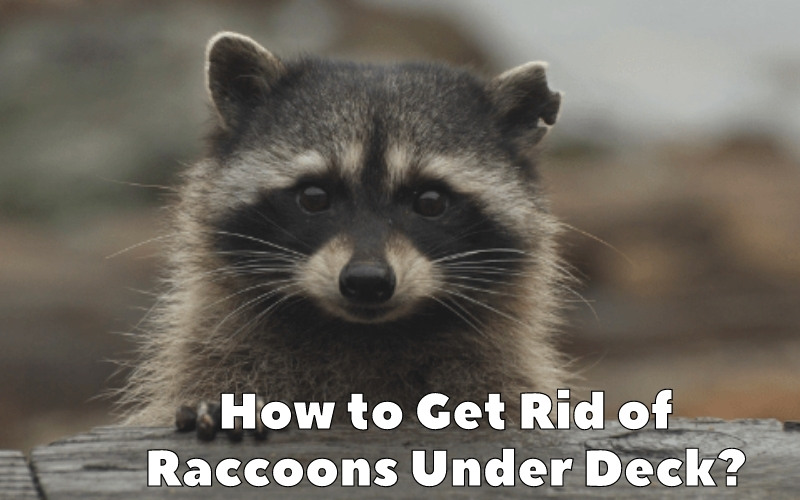 Raccoons look so cute in pictures. Their wide eyes and bandit’s face make them seem irresistible. Looks are deceiving as raccoons have sharp teeth and claws, can injure pets or children, cause destroy areas around your home, and can carry rabies. They are highly defensive with humans and can’t be tamed like wild squirrels and rabbits.

There are ways on how to get rid of raccoons under deck. You can call animal control or a pest control company that will trap them. You can change the environment so they leave voluntarily. You can trap them yourself but that is ill-advised.

Read further to find out why raccoons are living under your deck so you can develop a good solution to the problem.

Raccoons look for safe areas to nest in the spring to have babies, or as they are called kits. Underneath your deck probably appears like a resort to a raccoon. It’s cool, dark, shaded, and secluded. It is probably also close to both food and water as you may have trash cans a garden hose, and water features nearby.

There may be some added treats in that you leave some food stuck to your grill or open trash after a family barbecue. Raccoons know how to make the most of a party.

How to Know If a Raccoon Is Living Under the Deck?

Raccoon moms are gatherers by nature and they will steal from the trash or other places to create warm nests for their kits. You will see the signs of this.

Another sign is raccoon paw prints and droppings around the yard, driveway, or deck. Raccoons will patrol at night so you may get several automatic security alerts or outside lights coming on automatically. You may hear strange noises at night like high-pitched screeches, scratching, or whining.

The tell-tale sign of raccoons is trash bins tipped over or trash scattered all over. They can also chew electrical wiring, dig holes near fencing and even gnaw around windows looking for a warm place.

Read: How To Clean Dog Urine From Concrete Patio?

Every home expert says the first thing to do is speak to a wildlife professional about your problem. Be sure any wildlife removal company you use is licensed and monitored. Also, ask about their use of humane practices.

However, most advise that you should only use removal as a last resort. There are other methods.

Understand that raccoon families don’t nest permanently in a spot. The mother stays there with her young until they can be moved, which is typically late summer. If you can live with them that long, it would be best to wait until they move on and then take corrective action to prevent their return.

You can encourage the raccoons to leave sooner by implementing changes that make it uncomfortable for them to stay. Remove the food and water sources. Find a way to secure your trash cans and turn off your water feature.

Raccoons hate noise and light. You can find a way to make the space under the deck “noisy” and more lit up. Placing a wireless speaker aimed at it with rock music and putting a spotlight aimed at the space all night ma work.

You can also change the smell. Raccoons, like all wildlife, have great senses of smells. Soak some rags in apple cider vinegar, ammonia, or other vinegar. Put the rags near the den’s entrance.

Scent deterrents don’t always work and can be ineffective when used alone. They are more effective when a part of combined efforts that will urge the raccoons to move on.

Read: How To Get Rid Of Mushrooms In Mulch?

Why Trapping Isn’t a Good Idea?

Most experts discourage trapping for a few reasons. First, trapping a raccoon is illegal in many parts of the country. Second, trapping the mother and relocating her will ensure her babies will die. Three, trapping is stressful on the animal and is considered to be the least humane option.

It’s time to prevent a raccoon return once they are gone. That means sealing off your deck with a sturdy mesh, wooden planks, or fencing. Remember, they can chew through a thin mesh so make sure it’s sturdy.

Check your fence for holes or cracks and replace. Make sure other entry points, like sheds or underneath sheds, are blocked. Cover or dump water sources at night. Dump bins that collect rainwater and anything from an old tire to a bucket that collects water.

This will help reduce the mosquito population over the summer too.

Removing a raccoon’s water source also means covering or turning off your water feature at night. You may want to cover your pond or other freshwater sources at night if you can.

The most important thing is to not give them access to food. Make sure your garbage is inaccessible, especially at night. Keep it sealed and even put a cinder block on the lid so raccoons can’t open it. This is the number one thing you can do to discourage raccoons from visiting your property.

Don’t leave any pet food out. Remember, pet food can be for anyone who wants it and that includes a hungry raccoon.

Pay attention to your bird feeders. Raccoons will take seeds out of feeders if they can climb up to them. That makes bird feeders in trees, on porches, or wide poles vulnerable. Make sure bird feeders are on top of thin poles that raccoons can’t climb.

Raccoons are wild animals so they are unpredictable. They can bite and will attack. They can carry rabies, roundworm, salmonella, tetanus, and listeriosis. They also can create a lot of damage.

Are male raccoons with the mother and babies?

Usually no. Nests are created by the mother and she lives there with the babies until they are old enough to travel to a new location.

How do I keep raccoons out of my garden?

As with under the deck, leaving a radio tuned to a rock station and lights in the garden at night may make it uninviting to raccoons.

What do raccoons eat?

Raccoons are scavengers so they will eat anything including fresh eggs laid by chickens. They like apples, pears, peaches, potatoes, sweet corn, and peas.

This is why it’s important to protect your garden and any chicken coops from raccoons. They will kill chickens to get to the eggs.

Can raccoons dig under a fence?

Yes, raccoons can dig under fences and barriers around decks. That’s why barriers need to go at least six inches into the soil to prevent raccoons from getting in.

What creative ways are there to scare raccoons away?

One of the easiest things you can do is put out some pinwheels and streamers around the raccoon nest. They don’t like the reflection or movement.