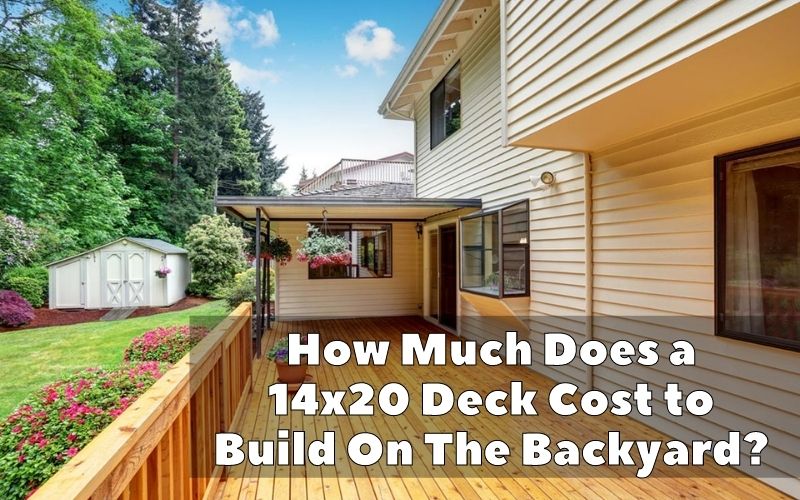 Decks are great additions to any home. They provide a place for people to gather, entertain and create another access from the main portion of the house to the backyard. They also add value to your home.

How much does a 14×20 deck cost to build on the backyard? Size matters when it comes to deck costs, and a deck of this size currently averages $6,160. That depends on the type of wood used, foundation set, and labor costs.

Read further to find out more about what goes into the costs of building a deck.

Average Costs of Building a Deck

It’s difficult to pinpoint an exact price for a specific size deck because each deck construction varies. A sloping yard, a tall deck, a selection of hardwoods, and special additions like terraced levels will raise the cost.

The Cost of Materials

The material cost has proven to be unpredictable over the past two years. Costs have jumped and pressure-treated decking isn’t as cost-effective as it was just a short time ago. It was once 20 to 30 percent cheaper than composite or hardwoods but now it is only 5 percent less.

Deck flooring costs between $15 to $25 per square foot, according to the latest numbers. Hardwoods and composites cost from $15 to $40 per square foot.

That should give some homeowners pause because hardwood and composite cost less to maintain, are more durable, and will last longer than pressure-treated lumber.

Read: How To Clean Dog Urine From Concrete Patio?

Decks that are not on the ground level will require support framing and that is an additional cost. This means the installation of concrete footers, beams, support posts, ledger boards, and joists. This is highly important as there have been accidents where the weight of an ongoing party was too much for the deck, causing it to fall and leave people injured.

Builders will always use pressure-treated wood for framing. Framing costs have more than doubled since 2019 with it now averaging $85 to $100 per square foot.

The deck’s foundation becomes even more important if you plan on adding extra weight to it such as putting a hot tub on the deck. That will require some extra support in the foundation and frame.

Building a ground-level deck is much cheaper because you can place it on concrete blocks instead of a concrete foundation. A concrete decking block costs only $50 to 575 while poured concrete will cost between $200 and $400.

Simple is cheaper when it comes to decks. A rectangular or square deck with straight planks doesn’t cost additionally. Those who seek out special looks like diagonal stripes or a herringbone pattern will pay for the customization. That can tack on another 15 percent to the final price tag.

Anything extra attached to your deck will cost you extra. Most deck builders will include one set of stairs in their overall cost but a second set is extra. Railings can be extra as are things like second-story decks and raised decks, along with their stair and railing requirements.

A roof can cost up to $10,000 and lighting can be from $8 to $150 per light fixture. Most people want electrical outlets on their deck and those must be included in the plans.

Adding ways to enclose it during winter, deck skirting, heaters can add anywhere from $100 to $25,000 to the cost of the deck.

You will also need to pay additionally if you want an old deck demolished to replace it with a new deck.

You will hear various terms when talking about decks and each deck type has a cost attached. Floating decks are decks built away from the home on the property. They can cost between $20 to $60 per square foot.

Platform decks are the most common type. They are built on the lower level of the home and don’t require an expensive foundation. These cost between $10 and $20 per square foot.

Raised decks are those built to adjust for unlevel terrain. They may be one platform or have multiple levels and require additional stairs and railings. The price for these varies but it’s in the top-tier of costs.

Multi-level decks are one of the most expensive type to build because of the amount of construction and materials involved. They can cost 1.5 to twice the price of a platform deck.

Two-story decks are another common amenity. People like the balcony but the foundation and extra construction add up to $40 to $50 per square foot.

Why Build a Deck?

Decks make your yard look better, provide outdoor space, and increase your property value. Decks can provide you with an 80 percent return on investment. Decks also appeal to potential homebuyers if you decide to sell.

However, decks must be well maintained to provide raise your home’s value. Weathered and broken-down decks will decrease the value of your home.

Read: How Can I Make My Backyard Attractive?

Will I need permission to build a deck?

It depends on your city and your Homeowners Association (HOA) if you have one. Some cities require permits for any construction at your home and others only require them if the deck is a certain size.

HOAs may have rules about the type of deck that can be built, the color, the wood, and other factors so it’s best to know that up front. They will fine you or take you to court if you violate their rules.

Will contractors provide a warranty for my deck?

Not all contractors will warranty a deck so you will need to ask. A warranty may be a strong selling point for you.

Is it cheaper to build your own deck?

Overall, it is about half the price to build your own deck if you can find cheap lumber. Those building a basic deck with the least expensive wood will pay between $8 to $10 per square foot compared to $25 per square foot of hiring a professional.

Is it hard to build a deck?

It’s relatively simple to build a typical square or rectangular deck, especially if it’s at ground level. It includes creating a basic frame from beams and then finishing it with decking material.

Where deck construction gets complicated is when you have to add foundation, support beams, and accommodate for extra weight.

What’s the toughest part about building a deck?

Most say digging the post holes is the hardest and more labor-intensive part of building a deck. Laying a foundation and adding support to the deck is second.

How do you choose a deck design?

Look at how you will use the deck and look at your terrain. That will help you narrow down which deck design is best for you and your budget.

Builders state a deck shouldn’t be any bigger than 20 percent of the total square footage of the home.